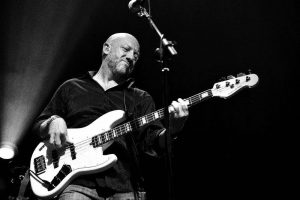 Paul Geary is responsible for laying down the low frequencies of Nik Kershaw’s band. In 1993, he was voted Best “New Musician” by the British Music Association and has since established himself as one of the UK’s foremost studio bassists and active session musician. Paul started his playing career comparatively late, having had no formal music training. He started playing bass in a gospel church at the age of 18 and shortly after this he went on to study music in the US and is now an Honors Graduate of Berklee College of Music in Boston USA, and B.I.T, Musicians Institute of Technology in Los Angeles, California. He received his first break in 1991, working with soul diva Lisa Stansfield and Gabrielle. Shortly after this, he went on to work with Chris Rea and played alongside Jools Holland as part of the Princes Trust Rock School. Later in the autumn … Continue reading Paul Geary

Copy and paste this URL into your WordPress site to embed

Copy and paste this code into your site to embed